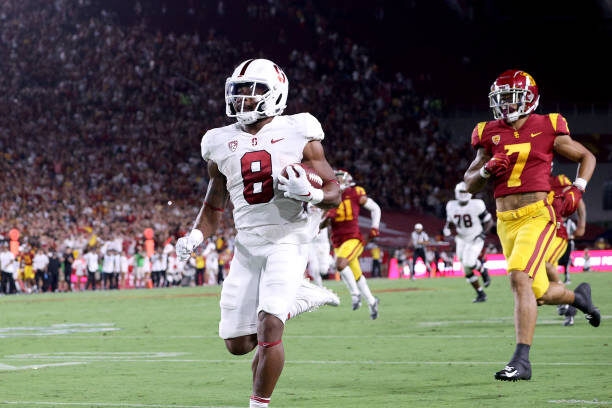 The Conference of Champions had an adventurous week. In the North, Oregon upset the heavily favored Ohio State Buckeyes. The powerful Duck offense answered everytime Ohio State made a move. It was Ducks’ first win against the Big10 powerhouse from Columbus and an important statement win for the PAC12. It was also the first regular season loss for coach Day in his tenure with the Buckeyes. Washington fell flat at the Big House and was dominated by Big Blue.

The Pac12 South had plenty of story lines with the biggest being the surprising win by Stanford over USC at Memorial Coliseum. Trojans coach Clay Helton was terminated soon after, but let’s face it, Helton has been on the hot seat from the day he was hired. Colorado came close to pulling off the second big upset of the day for the conference, but fell short against Texas A&M. Nothing much changed with the Arizona schools, while Utah lost to an invigorated BYU program fresh off their Big12 acceptance.

This weekend’s slate of games includes a Top 25 match-up in Provo, a Power 5 battle in Boulder, a bounce-back opportunity for Utah and some nervous folks in Seattle .

PROVO:  Arizona State and QB Jayden Daniels have started the season off hot. The Sun Devils are 2-0 going into a big road game against BYU. The Sun Devils won both games by 27 points, but against inferior competition. Jayden Daniels continues to show off his dual-threat skills, throwing for 175 yards on 20/29 passing, as well as 122 yards on 13 attempts rushing in a 37-10 win over UNLV. BYU is 2-0 as well, defeating two Pac 12 programs, Arizona and in-state rival Utah. Sun Devils defense will need to focus on BYU Running Back Allgeier to walk away from Provo with a win. This is an important games for both programs that can dictate the success of their 2021 season. Popcorn game.

PASADENA:  Coming off of a bye week and an important program win against SEC power LSU, the Bruins look to continue their winning ways when they host the gritty Fresno State Bulldogs on Saturday night. A couple of weeks ago Fresno played Oregon close in Eugene, so UCLA knows they cannot overlook the team from the valley. UCLA QB Dorian Thompson-Robinson and RB Zach Charbonnet have started the season off with stellar execution of Chip Kelly’s offense.  With UCLA opening their PAC12 schedule next week verses The Cardinal, the Bruins could be concerned with just getting the W so we’ll stay away.  Popcorn Game.

BOULDER:  The Buffaloes played SEC Conference contender Texas A&M last Saturday and almost shocked the college football world. Colorado’s defense was stout last Saturday, only letting up one touchdown. Unfortunately, it was on a game winning drive by the Aggies late in the fourth quarter. Linebacker Nate Landman finished with 10 tackles, and QB Brendon Lewis showed his dual-threat ability running for 79 yards. This week the Buffs face a Minnesota team coming off of a close win at home against Miami (OH). This will be an intriguing game of evenly matched teams with aspirations of a bowl birth. Can the Buffs maintain their sniffling defense verses another solid offensive line?  Popcorn Game.

SAN DIEGO:  Coming off a loss against #23 BYU, Utah will look to get back on track in a non-conference game against San Diego State. Last week was the first loss for the Utes in the Holy War since 2009 while San Diego State is coming off of a 38-14 thrashing of the Arizona Wildcats. This is a good test for Utah to see how they respond from an emotional loss in Provo. Utah QB Charlie Brewer will look to bounce back from a sub-par outing against the Cougars. Running back Micah Bernard will look to continue on an impressive season, currently averaging 10.1 per carry in 2021. This could set up to be an excellent in-running opportunity if Utah can catch an early lead verses the Aztecs.

TUCSON:  The Wildcats will play in-state opponent Northern Arizona. Both teams are still searching for their first win of the season. Arizona QB Will Plummer got the nod to replace starter Gunner Cruz after a rough week two loss to San Diego State. Northern Arizona has had two tough losses to start the season and will have to deal with Wildcats’ coach Fisch looking to bank his first win at the program. No line at this moment, but when it hits, we will take a serious look at Zona.

PULLMAN:  Head coach Clay Helton was fired on Monday after the 14 point loss to a Stanford team still finding its way in 2021. Helton has been on the hot seat since he was hired. With SC on the search for a new head coach, they have winnable games over the next few weeks with Washington State, Oregon State and Colorado. Kedon Slovis has been disappointing under center for the Trojans, but has an opportunity to flex his talent against Washington State on Saturday afternoon.

Washington State QB Jayden de Laura played fantastic in last week’s 44-34 win over Portland State. This game has our interest as a fan, but not on the betting side. Can Wazzu’s offense continue to learn and grow in Rolovich’s second year in Pullman or does SC shake the loss of their coach and play to their potential? This is another wait and see game for us. Popcorn game.

NASHVILLE:  Coming off of a huge upset win over conference rival USC, Stanford had to be careful for a letdown moment in Nashville. The good news for the rood favorite is that Vandy is vulnerable on defense and doesn’t pack much of a punch on offense. Cardinal QB McKee was efficient and effective against Southern Cal in week two, throwing for 234 yards and 2 touchdowns. Vanderbilt is 1-1, coming off of a win against a stumbling Colorado State football team that has trouble holding an early lead. This is a critical game for a Stanford team coming off of the big program victory in LA.

VS:  We are on the Cardinal here -11 (-110) at WynnBET and also pressed at -11 1/2 (-110) BetMGM. This bet goes against many trends; letdown after SC game, traveling east and road favorite, so it is a scary bet in many ways. We might be a bit extended here, but our thinking is that Shaw will focus his team (on a business trip mentality) to get the win in SEC Country. It is an important game for the PAC12, plus can move Stanford one game closer to bowl eligibility.

EUGENE:  Oregon is coming off of their biggest program victory since the 2019 Rose Bowl. Oregon beat the Ohio State Buckeyes in a thrilling 35-28 victory. Oregon jumped up the AP Poll to #4, and will look to continue its chase for a playoff appearance. Stony Brook is 1-1, coming off two games where they were competitive against non-Power 5 opponents. Oregon should be able to take a deep breath here and soon will turn their attention to the PAC12 schedule. Pass.

CORVALLIS:  Against Hawaii, QB Sam Noyer was benched for former Cornell QB Chance Nolan. Nolan, a dual threat quarterback, threw for over 300 yards and ran for roughly 37. Oregon State has an all-time record of 37-6 over Idaho. The Beavers need to put away the Idaho Vandals early with a trip to face SC up next.

BERKELEY: California is 0-2, but playing well at times in those loses. A game verses Sac State might just cure those woes. The Golden Bears played well on the road against TCU well, suffering a 34-32 loss. Cal QB Garbers threw for 309 yards and two touchdowns against a Gary Patterson defense. Once again, Cal let a lead slip away.  Defensive-minded Justin Wilcox needs to get the Cal defense in tune with a tough road tilt in Seattle next week. Pass

SEATTLE:  This a game of particular interest to us. Washington has had a horrendous start to the 2021 season with an under-appreciated loss to the Griz and then getting a can opened in Ann Arbor last week. Dark days on Lake Washington. Coach Lake knows the buzzards are flying overhead and he is seeing those shadows.

Nobody is factoring in that Montana has allowed a paltry 2.0 yards per rush and Michigan just 2.6.  Also, there was a key penalty on Arkansas State on the other hand is allowing 7.1 yards per carry. The strength of Red Wolves is QB and WR will be negated by speed on the corners. Also, expect some ground and pound from the Huskies. Lake should stop the bleeding here verses an over-matched team from the Sun Belt.

VS: They say it’s darkest before the dawn, although not in Vegas. As bleak as things look in Seattle, the Huskies are turning out to be our largest bet of the weekend. We have the Huskies -16 ½ (-110) at PointsBet for the game and -9 (-110) in the first half at BetMGM.