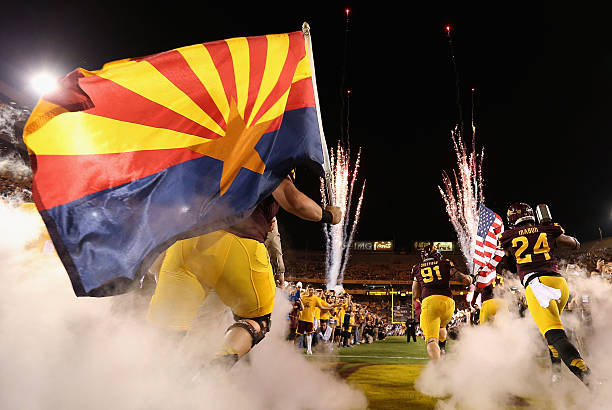 This past week of PAC12 football did not go as fully expected. There were some upsets, and also games that played out the way we expected them to. The backfield of Travis Dye and QB Anthony Brown was too much for the Buffaloes to handle on Saturday, as the Ducks routed the Buffs 52-29. There was a silver lining for the Buffaloes. 4-star QB1 Brendon Lewis had his best outing of the season in Eugene completing 25 of 33 passes and throwing for 224 yards and three touchdowns. Ducks QB1 Anthony Brown one upped Lewis as he got the win and threw for over 300 yards and three touchdowns.

Washington defeated Stanford 20-13 as both programs struggled on the offensive end. Tanner McKee, Stanford QB, threw two interceptions while throwing for zero touchdowns on Saturday. Sean McGrew rushed for 114 yards on 19 carries for the Huskies to help them secure the win.

UCLA missed a familiar face on Saturday, resulting in a blowout 44-24 loss against the Utah Utes. Tavion Thomas took over for the Utes, rushing for 160 yards and 4 touchdowns in the blowout win. The Utes were 8 for 12 on third down conversions, while the Bruins’ only converted on 4 of 16 third down plays. SC defeated Arizona in a close win on Saturday to move the Wildcats to 0-8 on the season. The Trojans tested out a new Quarterback system, allowing both Kedon Slovis and Jaxson Dart to split time and snaps on Saturday. Both Quarterbacks threw for 2 touchdowns, and as of now SC does not know its plans at Quarterback for this weekend where they play on the road at Arizona State.

Chase Garbers and California had another good week as they beat the Oregon State Beavers 39-25. Garbers threw for 3 touchdowns to help the Golden Bears rise above Oregon State. Jayden Daniels’ inconsistencies showed as the Arizona State Sun-Devils lost to Washington State 34-21. Daniels threw for 2 interceptions in the loss and struggled to gain first downs. Washington State Wide Receiver Calvin Jackson Jr caught 8 receptions for 139 yards and a touchdown in Cougars win on Saturday.

Dorian Thompson-Robinson served as the backup quarterback on Saturday due to an injury to his throwing hand. This bye week will help DTR get back to full health while also helping the Bruins bounce back after a beatdown loss against Utah. UCLA will use this extra week to get healthy and prepare for a struggling Colorado Buffaloes program.

Washington State is 5-4 going into their bye week. The Cougars will go to Eugene after their bye week and will need all the extra preparation they can get to beat Oregon.

Going into this week, the Ducks are 7-1 and look to keep momentum as they chase a College Football Playoff appearance. Washington Head Coach Jimmy Lake took shots at Oregon’s school as a whole, saying that their recruiting battles mostly come with schools that “have academic prowess.” The Ducks backfield looks unstoppable as Anthony Brown is one of the best dual threat QBs in the nation. There are zero significant injuries to note for both of these programs going into Saturday. The game will take place indoor at Husky Stadium in Seattle, Washington on FieldTurf.

The Buffaloes are coming off of a beatdown loss to Oregon, but with that QB Brendon Lewis had his best outing of the season. Lewis has not performed like he did all season and will want to showcase his skill set at Folson Field in Boulder, Colorado against the Beavers. Oregon State suffered an upset loss to California and will look to bounce back against the Buffaloes on Saturday. WR and Kick Returner Dimitri Stanley is out on Saturday for the Buffaloes but look out for a potential return for WR Vontae Shenault on Saturday. The Beavers have no injuries and are looking to beat the Buffs in their chase for a strong bowl game.

California has won two straight games to bring their record up to 3-5.  They are starting to look like one of the PAC teams on the rise. Arizona is 0-8 and hasn’t shown much of a competitive threat against conference teams this season, with the exception of SC last Saturday. With Arizona QB Gunner Cruz suffering a season ending injury, backup QB Will Plummer will try to do anything he can to get a win for the beyond struggling Wildcats. The Golden Bears will travel to Tucson to play the Wildcats at Arizona Stadium on their FieldTurf.

Utah enters this week 5-3 against a 3-5 Stanford team. Stanford clearly has shown their inconsistencies this season, but has also shown that they can beat anybody in the country.  The win against Oregon might prove to be one of the largest upsets of the 2021 season. Tanner McKee has shown that he does not shy away from important situations but has also shown his inconsistencies in the process. Cameron Rising and the Utes are coming off of a huge win against UCLA and will look to chase a bowl game and defeat the Cardinal this upcoming week. Utah will travel to Stanford Stadium to play on their natural grass on Friday night to start PAC12 football off for the week.

SC is 4-4 on the road against a 5-3 Arizona State team. SC had an interesting offensive strategy, as they decided to split time between two Quarterbacks, Jaxson Dart and Kedon Slovis. Slovis has not been the seasoned QB that the Trojans expected him to be, and true freshman Jaxson Dart is finally healthy after a monster outing against Washington State in week 3. The Trojans are not sure of their plans are yet for this upcoming week when it comes to Dart and Slovis. Arizona State started the season 5-1 looking like one of the best teams in the PAC12. Jayden Daniels has been inconsistent as of late, and the Sun-Devils have dropped their past two games. They will look to bounce back this week at Sun Devil Football Stadium on their Bermuda grass.